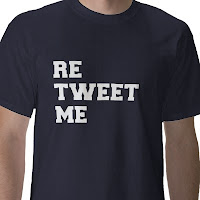 There's no quicker way to make me shake my head and move on than to write "Please RT" at the end of a tweet. Now, if you are a nonprofit organization trying to raise awareness about an issue, you are the exception. I have no qualms with people spreading philanthropic messages or asking for a retweet to help a worthy cause, either. But, for you regular Joes who write "Plz RT" when you share your own content (e.g. blog post, podcast, video, etc.), you make my eye twitch.

Twitter is a happy place for me; it's me time. Time where I'm calling the shots, tweeting what I find interesting, and sharing with the community. If I find something worthwhile, you bet I'll retweet it. If I want to support someone I like, you can count on me to share their content. But the "Plz RT" after a tweet turns me off. It feels desperate and demanding all at the same time.

If you have retweetable stuff and a targeted audience, it'll get retweeted. It's a beautifully simple process. Sure, alright, sometimes good things won't get retweeted. It happens. But, asking for a retweet just rubs me the wrong way. Sometimes, people even take the request to the next level by asking via direct message.


"Hey Amber! Will you RT my blog post on colors for the nursery that make your baby poop less?"

No, no I won't. If this person knew anything about me they'd realize that's not what I tweet about. My Twitter stream is fairly targeted and focuses on business, writing, social media, and related topics. Not childcare. If I don't RT your post, it doesn't mean I don't like you. But, frankly, I'm a little annoyed about being asked to do something which clearly illustrates you don't know me. Identify your audience and find people who care about baby poop.

As for putting "Please RT" in a tweet, yes I know it isn't a crime. Nobody dies. No one even gets kicked in the shin. But, it's not something I'm going to respond to. You get retweets by producing good content, establishing relationships with those in your Twitter stream, creating a targeted following, and building a good reputation for knowing your stuff. Not by asking for favors from strangers.

Do you find the "Plz RT" thing a little self-absorbed or am I in this boat all alone?
Posted by Amber Avines at 9:02 AM