Can I put this person in spelling prison? Pretty please?

Typos happen. We spend most of our days tapping out messages on qwerty keyboards or on small touch screen phones. Every once in a while our typing gets sloppy and looks like word vomit. We're not stupid; our fingers just get lazy.

That said, when we print, there is no excuse for a misspelled word. If we spell it wrong, it's safe to say we just don't know how to spell it (and don't care enough to look it up). Some words are challenging. I'll be generous and consider that a given. However, the word below is NOT.

I saw this sign as I was zipping around this weekend. It makes me sad and a little mad. Yard isn't even a word that requires you to sound it out. Heck, it's one stinkin' syllable! YarG? Really? Is this really what America has come to?

Forget universal health care, can we just buy everyone in this country a freakin' dictionary?
Posted by Amber Avines at 10:03 AM 7 comments:

Does your cocktail have cooties?

I attend a lot of networking events and, as such, I am a frequent observer of human behavior. Now, based on the title of this piece, you might speculate that I intend to write about mickeys, roofies, or drink tampering. Not today. Today is all about good manners--and germs.

This week, at an business event, I was talking with a friend at the bar. I had just ordered a Coke and was enjoying the conversation when the bartender set down my soda. As a helpful gesture, my friend went to grab the drink to move it closer to me. Harmless enough, right? Well, imagine my horror when she grabbed the drink by the top of the glass!

For those of you who have no problems buying food off the street from unknown sources or never think about how many sniffly, sneezy, sickies have held the stylist that you use to sign your name for credit card purchases, you probably have no idea what my issue is. For the rest of you, you know where I'm headed.

My friend's fingers touched the rim of the glass. The same rim where my lips go to sip on the drink!

Granted, I'm aware that 99.9% of the public wouldn't even notice this, but I did. And, I'm pretty sure my face scrunched up when I saw it happen. I did hold back the shriek, though.

So, here's my etiquette tip of the day:

If you touch someone's drink, always grab the glass at the bottom. Never the top. Never.

Granted, this probably isn't even on the radar of most people, but aside from being sanitary, it's just good manners. Now, I suspect no one will ever pass me a drink from this point forward, but that's alright with me. The fewer cooties, the better.

Want to meet me at the next networking mixer? You'll know me when you see me. I'm the gal with the long red hair and the gallon jug of hand sanitizer.
Posted by Amber Avines at 10:29 AM 12 comments:

I met Anita last year on Twitter. She lives in Michigan and I'm in California, so we've never had the pleasure of meeting in person, but we bonded quickly due to our mutual background in newspapers and our love of animals. I knew right away that this was one special lady.

On Twitter, Anita's primary handle is @modelsupplies because of her passion for skincare and all things beauty-related. She does webinars, online radio shows, and she tweets like there's no tomorrow. Her Twitter following of nearly 70,000 people is evidence of the reputation she's built online. She's smart, compassionate, and no doubt the most supportive person I've ever met in my life.

Today, Anita took an incredibly scary step--and she took it publicly. She told the world she wants to lose weight and is going to vie for a spot on The Biggest Loser. Since Anita knows the power of social media and promotion, she has created a Facebook page to help her in her quest.

Making a decision to challenge the status quo takes courage. Doing so in the public eye is even harder. Whether you know Anita or not, I hope you'll take a moment to support a wonderful person in her effort to change her life. You can "like" her Facebook page by clicking HERE.


UPDATE: After I wrote this story, Anita posted her own account of what has brought her to this point. Please read her insightful backstory by clicking HERE.
Posted by Amber Avines at 10:30 AM 13 comments:

Why media coaching is a MUST before any interview

As someone with a background in public relations and broadcasting, I've done media training for many high-level executives. Conducting an interview is not something someone should take lightly and it should not be assumed that you can just be yourself and it will all be alright. This is magnified ten-fold when the interview is captured on video.

Below is a stellar example of a person who was not adequately prepared to speak with the media. Her eye rolls, laughter, and facial expressions did nothing but discredit her and embarrass her employer. It's shocking that a company as well-known as Gawker, a media outlet itself, would not coach its editor to provide a more competent interview. Especially considering the controversial topic: stalking.

In this day and age where cutbacks are affecting businesses large and small, this is an important reminder that having a full-time, professional PR/communications person on the staff is crucial. When this interview took place, that role had been vacant at Gawker for four months.

Although there are many interesting tourist destinations in Hollywood, one of the most popular is one that isn't even open to the public. Capitol Records, best known for its design that resembles a stack of records, is one of Hollywood's most usual pieces of architecture (the light at the top of the "needle" even spells out Hollywood in morse code!). Although tourists approach the iconic building daily to tug on the locked doors, Capitol Records does not ever let in people to look around. That's why it was so special when recently, for one-day only, visitors were admitted onto the property for a tour. 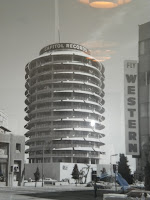 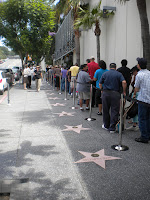 As part of the 50th anniversary of the Walk of Fame, the Hollywood Chamber of Commerce is sponsoring activities to celebrate the glitz and glamour associated with the coral and black stars that grace the sidewalks of Tinsel Town. Since many of the celebs on the Walk are recording artists, Capitol Records joined in on the celebration. However, its reps underestimated the interest and were caught off guard when the line wrapped around the block and people had to wait two hours, on average, to enter. Although Hollywood is in my own back yard, the opening of Capital Records is not something that is likely to happen again, so I waited along with the others to gain entry. 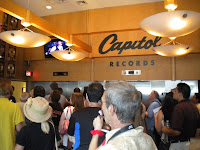 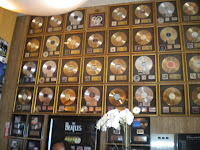 Once inside the lobby, the walls were covered with gold and platinum records from musical greats spanning the last 50 years. The tour then took visitors into one of the recording studios, most famously known as the room where Natalie Cole recorded "Unforgettable" with her deceased father Nat King Cole. Later, Green Day used the studio to record "American Idiot". Today, the room is also home to Nat's piano, which is signed by the great Billy Preston. 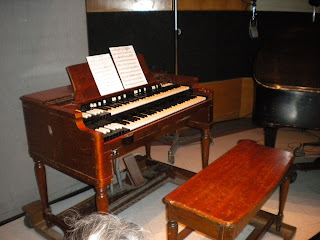 Visitors were then whisked off to the room where The Beatles held their first American press conference. Then, onto Frank Sinatra's stool and music stand where he recorded many songs (apparently, Sinatra wouldn't start a session with Jack Daniels, LifeSavers, and cigarettes on hand!). Engineers also demonstrated how sound is manipulated in the studios and played audio clips that illustrated how Capitol's world-renowned, one-of-a-kind, echo chambers (designed by guitar legend Les Paul) are used to make songs sound richer and fuller. After more great trivia and audio clips, the tour came to a close. 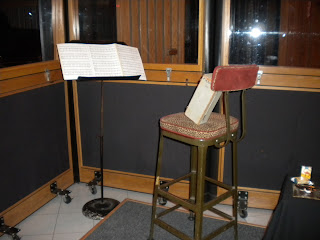 The year-long celebration of the Walk of Fame will conclude in November as Hollywood hosts a gala in the new Hollywood and Highland complex. To learn more about the historic walk, click HERE for a quick history lesson. Hooray for Hollywood!
Posted by Amber Avines at 5:55 PM 5 comments:

Sink your teeth into THIS online ad!

When I see a good ad, I like to share it (the last one I blogged about was a print ad for Drumsticks ice cream which had a great interactive component). The ad you see below includes two buttons to attract clickthroughs, but the great part of it is really just the very smart design. Memorable and eye-catching. The double row of shark teeth is fantastic! (To increase the size of the jaws, pun intended, just click on the image to make it bigger.)

Have you seen an ad lately that you think is particularly effective? If not, what do you think about the state of advertising today?