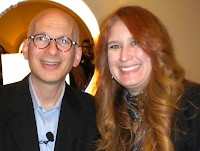 This month, I had the pleasure of hearing the amazing Seth Godin speak (if you don't know who Seth is, check out this listing of his books on Amazon; there are nearly 20 of them). Thanks to a VIP ticket, courtesy of Efren Toscano at TechZulu, I was given access to the insider's lounge where Seth greeted people before he took the stage. For music hounds, meeting Trent Reznor or Mick Jaggar is the be all end all; for entrepreneurs and marketers, that's what it's like to meet Seth.

Nearly 900 people were in attendance for the event, sponsored by Bryan Elliott of So Cal Action Sports Network and LinkedOC, and held at the gorgeous St. Regis Hotel and Spa in the upscale community of Dana Point, California. I felt like a giddy school girl as I made my way through the people in the VIP lounge and approached the man I've seen in countless videos and interviews. Clutched in my hand, a copy of his brand new book Linchpin. Seth and I chatted for a moment, then he signed my book and my friend took our photo together. Shortly afterward, Seth departed to the grand ballroom.
In usual fashion, his presentation was full of "a-ha" moments and lots of laughs. If you've ever seen Seth speak, you know he is great at keeping the audience entertained. But, here's the take away from the evening: Don't listen to the lizard brain.
No, that's not a typo. Seth calls that part of your brain that is afraid to take risks, that is too scared to think independently, that is more concerned with "fitting in" rather than "standing out", the lizard--the part that keeps the majority of people average. He went on to make the distinction of how when kids are in school, they so desperately want to be like everyone else. However, as an adult, you never excel, nor reach your full potential, if you don't dare to be different. So, silence the lizard brain within you and take that risk, embrace that challenge, do something different. Set yourself apart from the others!
I'm cracking open my copy of Linchpin today and expect that when I finish the last page of the book, that I, too, will be a little braver, a little bolder, and a lot less reptilian. Watch out world!
Posted by Amber Avines at 7:45 AM No comments:

I recently came across the winning entry in The Clever Film Competition, sponsored by Toyota's Australia division and the PR agency Saatchi and Saatchi. The video below won top honors, with the creators taking away $7,000 in prize money. The judges were people from Toyota, the agency, and those in the target demo of the Yaris. The words running through my head while I watched this award-winning piece? Yuck. Eww. Crass. Tasteless. Tacky. Vulgar. And, yuck, again.
No sooner than this winning entry, entitled "Clean Getaways", was placed around the web, Toyota suffered a huge backlash. Their response? This is not a spot which will air on TV. It's simply user-generated content (UGC) which the jury thought was funny and well made.
Do you think companies bear responsibility for promoting tasteless UGC? Because they didn't produce it, do you think that gives them a pass from any negative publicity? To me, anything that a company promotes is a reflection of its brand--regardless if it's UGC. If your company puts it out, you should be prepared to own it. Too harsh?
Posted by Amber Avines at 2:31 PM 6 comments:

How does Posterous fit into your social media portfolio?

There are so many social media platforms to tap into these days that it can sometimes be overwhelming. I'm a firm believer in tinkering around with everything to find out what works best for you and/or your brand. After all, you cannot devote 100% of your attention to every site out there; it's simply not possible.
Last month, I added Posterous to my arsenal of social media outlets. Many people in my business circle are on the site, so I wanted to check it out. For those of you not familiar with Posterous, it's similar to a blog. However, one of the nice features that it offers is autoposting. Essentially, you can post content to your Posterous from the web, or you can email it, and you can determine the other social media sites where you'd also like the post to appear. Currently, Posterous supports Facebook, Twitter, Flickr, Tumblr, Blogger, Wordpress, Typepad, Moveable Type, Livejournal, and Xanga. From a time management perspective, that option alone is pretty valuable.
Since I created my Posterous page, I've added more than a dozen posts and have tried to differentiate my Posterous from my blog, Twitter, Facebook business page, FriendFeed, LinkedIn, and plethora of other social media accounts. I have not used the autopost feature because my approach, at least for the moment, is that I try to avoid redundancy on my social media accounts. Aside from putting up teasers to my blog posts, all the content I post to Posterous is original (i.e. not replicated on my other SM platforms). Essentially, it's comprised of things that interest me and further highlight my personal brand, but may not seem worthy of a full-fledged blog post.
I'm still fine-tuning how I use Posterous and I'm sure it will continue to evolve. After all, social media is all about staying current, relevant, and changing with new online habits. What's big today may be passe in six months!
How do you incorporate Posterous into your social media strategy? If you're not on Posterous yet, do you think it might be worthwhile?
Posted by Amber Avines at 12:36 PM 6 comments:

Does Google Adsense make any sense?

Recently, I attended a networking event that tackles different issues pertaining to startups. The topic for this month's session was Google Adsense. Corporate America is all about monetizing, especially these days, so I wanted to see what I could learn.
In a nutshell, here's what I walked away with: the Training and Development folks at Google really need to give their people some guidance on how to give good presentations. Lots of talking, but not one visual. They described drop-down boxes, points on webpages, services forms, layout violations, but not one lousy slide. The two reps also frequently had a "deer in the headlights" look when asked a pointed question. It was almost like a presidential debate where candidates skirt the issue. Frankly, it was a bit strange.
Now, I understand there are variables in most every situation. And, yes, sometimes answers might not always be black or white. However, I can't really say I know any more about Google Adsense now than before I attended the session.
So, as with most things, you almost always learn more from actual users. And, that makes you the expert (if you use Google Adsense, that is). What do you think about Google's text ads? Do you find them to be a worthwhile way to earn significant money? What do you like? What do you dislike?
Not a Google Adsense client? Well then, I'd be curious to know if you've ever clicked on a Google text ad. I haven't. Am I in the minority?
Let's hear it!
Posted by Amber Avines at 9:15 AM 9 comments:

I have to give props when props are due, so kudos to Domino's Pizza!
For the last two weeks, I've seen the TV commercials claiming that Domino's finally realized their pizza was sub-par (a much too kind word for really bad!). The spots boast more flavorful sauce, a garlicy crust, and better cheeses. However, I'm sure many shared my thoughts: "Yeah, right!".
Well, last night I found myself at a networking mixer and, thanks to a day gone wild, I hadn't had a chance to eat lunch or dinner. To my delight, the room had a nice spread with food and drinks, so I scampered on over. There were cookies, deli sandwiches, chips...and Domino's pizza. I would have gone for the sandwich, but it was ham (and I'm a vegetarian). I hesitantly looked at the Domino's box and opened it up. Mushroom! Score! But, it was Domino's pizza so my excitement diminished. Truth be told, I don't think I've had their pizza in at least five years; vowing never to waste my money again on something so horrible.
Remembering the TV spots promising a better pizza, I opened the box back up and grabbed a slice. "Heck, I'll give it a try. Let's see if you can really taste a change." And, to my amazement, it was actually good! Let me repeat, my slice of Domino's pizza was downright tasty!
Yes, I know you're probably skeptical, but I highly encourage you to give it a shot. It has undoubtedly taken much too long for Domino's to make a desperately needed change to their recipe, but better late than never. Believe it or not, I'm actually gonna add the local Domino's to my speed dial now. Good pizza for $5.99? Now, that's what makes America great!

UPDATE May 4, 1010: Here's an interesting story from USA Today that says Domino's sales have gone up 14.3% since the new recipe was introduced.
Posted by Amber Avines at 4:54 PM 5 comments:

Now THIS is good marketing

I love smart marketing and promotion. Something that's authentic, creates buzz, and is truly original. This video from Coca-Cola is all that and more.
Check out what happens when a "special" soda machine is put onto a college campus.