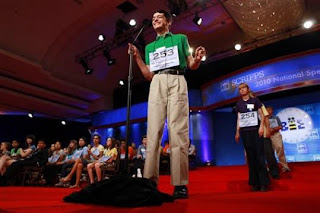 Today is National Donut Day. I'd rather be writing about fried dough and sugary icing, but I'm ticked. Why? This week, illiteracy in America took a huge leap forward.

As a writer and communicator, I love words. The dictionary and thesaurus are two of my favorite books. I imagine many of you are fans of the written word, too. Well, some lunatics are actually protesting this year's Scripps National Spelling Bee. Apparently, they think we should all spell like simpletons (e.g. froot instead of fruit, hefer instead of heifer, slo instead of slow). They call it simplifying; I call it stupidity.

The nearly 300 children who made it to Washington D.C. this week to stand on stage at the National Spelling Bee are amazing. They have studied, learned the history behind all the root words, and taught themselves the complexities surrounding language.  Instead of honoring these kids with signs of support, these idiot protesters are passing out buttons that say, "Enuf is enuf. Enough is too much." Is it really so hard to learn how to spell a word properly? Get a word a day calendar, pick up a dictionary, read, educate yourself.

In an era of texting, people are becoming even lazier spellers, too. To me, a misspelled word in a professional context (not a typo, but an obviously misspelled word) is an immediate red flag. Heck, if the love of my life were to write me the most amazing love letter, but it was full of spelling errors, I'm afraid I'd have to kick him to the curb.

So, wise up, America! Love the English language, learn to use it, and teach yourself to spell properly. You don't have to be a spelling bee champ to know the difference between to, too, and two.
Posted by Amber Avines at 6:29 PM