Are "cutsies" ruining your customer service? 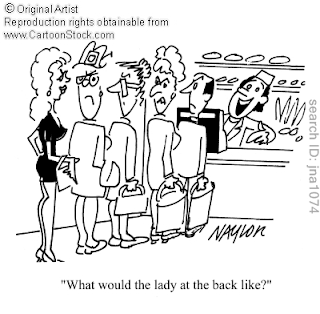 The other night I was in line at 7-Eleven to buy a Slurpee. I was sixth in line with one guy behind me. After standing there for about 10 seconds, the customer behind me marches to the front. "I have a tab," he says. "Can you just scan my stuff?" The cashier stops the line, scans the man's items, and makes the rest of us wait.

Aside from the fact I had no idea you can have a tab at 7-Eleven, my point here is really the lousy customer service that cashier offered. The customer's method of payment was irrelevant. It took just as long to conduct his business as it would have had he paid in real-time like the rest of us. Sure, one guy was happy, but the six people in line were mad. I'm not a math whiz, but I say the ratio of pleased customers to annoyed customers in this scenario favors the latter.

Ironically, the following day I was in line at the post office. As I was waved to the counter and started to conduct my business, a woman siddles up next to me and asks if she can buy a stamp. I can't remember the words the clerk used, but I do remember he sent the gal to wait in line. I promptly thanked him on behalf of everyone who had waited in the cue for their turn.

Now, if you're thinking, "What's the harm? It's one lousy stamp!" you may very well be part of the customer service problem. I've been in the "I need one stamp" boat, too. How have I solved that problem? Well, I've said loudly to the people in line, "Anyone have a stamp I can buy?". There has always been someone willing to sell me one. I have never thought my time was more valuable than any of the others waiting in line and tried to cut ahead. Never.

If you run a retail business, you should put a cutsies policy in your customer service guidelines. There is nothing wrong with a clerk telling an out of line customer (pun intended!), "I'd like to help you, but it wouldn't be fair to the others who have been waiting in line. I'll get through everyone just as quickly as I can. I promise." What rational person could argue with that?

In the case of the post office scenario, after I thanked the clerk for turning away the cutter, he told me that if they have enough cashiers, they'll call people out of line who have simple transactions (like purchasing stamps). They do that same thing at my bank. Sounds like a good policy to me. (Yeah, the irony that I'm using the U.S. government in an example of good customer service is not lost on me!)

Perhaps in some backwards world, the cashiers who allow cutsies think they're offering great customer service. You don't want to wait? Alright, let me take care of you right now! One delighted customer and a line of irate ones. Sounds like a winning proposition to me...
Posted by Amber Avines at 7:26 PM