For better or worse, there are no secrets in social media. If it happens in my circle of friends, it gets tweeted or Facebooked about.

This week, I was talking with someone about not being invited to the birthday parties of some mutual friends. People were tweeting from the parties so it was hard to miss the fact that they were together and I was home. In all actuality, though, the people I'm referring to are friendly acquaintances and not true blue friends, so I understand the oversight. No harm, no foul.

However, after this brief discussion with my friend I felt like I was 15 years old again. Just for a minute, but it happened. What do I care if I wasn't invited? Truth be told, I don't care in the least. Honestly. But that young adolescent in me seemed to rise to the surface for just a few moments. The girl who wasn't asked to the dance or didn't get invited to the head cheerleader's surprise party.

Ever tweet someone who didn't answer you back? How about comment on someone's Facebook status only to see him or her answer everyone else back except for you? Have you ever put something really serious out there, only to feel like you're talking to yourself (the many folks who have announced their suicides via social media and only received snide replies or jokes as responses comes to mind). 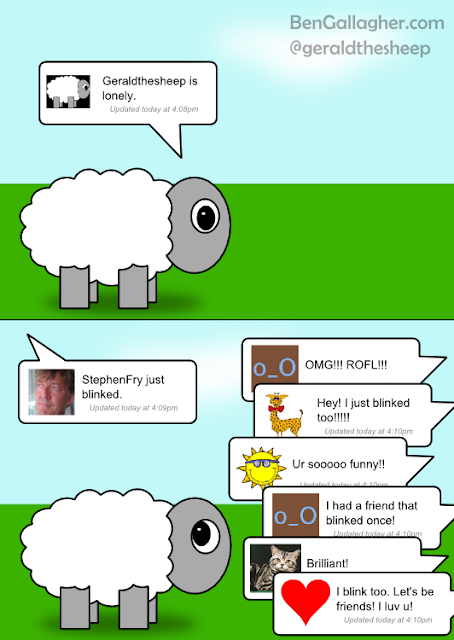 That takes me to Google. I wrote a blog post a year and a half ago asking if Facebook was making people lonelier. I discussed my friend who was feeling left out and sad because she was ignored by her "friends" on Facebook. I didn't have much of a readership back then, so the piece has been gathering dust in the archives. That is until people recently started entering "facebook lonely", "facebook lonely people", "lonely people on facebook", and "facebook is for lonely people" into Google search.

According to Google Analytics, these search terms represent four of the top 10 keywords people use that ultimately direct them to my blog. All told, that is 50% of my traffic from search! So many people are using those search phrases that my post on Facebook making people lonelier has risen to the sixth most popular post on my blog out of hundreds that I've written. Imagine that. A piece about people feeling left out because they're ignored on Facebook. There's definitely something to that.

In a new world where we share our private lives in the public eye, everything that happens in our social circles is out there for the world to see. Your friend posts a photo album to Facebook that has photos of her last dinner party that you didn't know about. Someone tweets about the drinks he's enjoying with people who you thought were your friends, too, but who didn't seem to include you. When people talk so openly, there are destined to be those who feel left out and have their feelings hurt. Those who will, undoubtedly, revert back to insecure teenagers; wondering why they were overlooked.

As kids, we actually were insecure. Even the popular kids. But, as adults, thankfully we have the good sense to know what matters and what doesn't. We know the power we have to shape our lives and circumstances and that we are not merely pawns in someone else's story. We all know that.

But, strangely enough, whether we're 25 or 60, sometimes we all have a little 15 year old hiding within us. Why is that?
Posted by Amber Avines at 7:51 AM