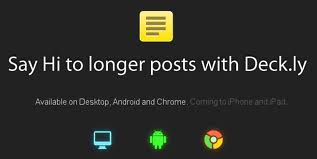 One of the things I like best about Twitter is its built-in brevity. No rambling. Limited nonsense. Perfect for quick info and to-the-point conversations. One-hundred-and-forty characters is enough for me.

However, if you use a Twitter client such as TweetDeck, you've now officially been empowered to drone on...and on...and on. In the latest version of TweetDeck (version 0.37), launched this week, the company saw fit to install Deck.ly integration. What that means is that you can tweet beyond that 140 character number and a link will be installed into your tweet directing people to the entire message.

Worse yet, the window in which you tweet just lets you go beyond your 140 character limit without making it obvious that you're a chatty cathy. It used to be that the window and text changed color when you went beyond your character count. Now, with the "upgrade", it just puts a tiny "+" sign on the right where your character count is located. One could, very easily, utilize Deck.ly without really realizing it. Talk about annoying.

Fortunately, the TweetDeck support site is blowing up today with complaints about the new feature. Users, rightfully so, want the option to turn off Deck.ly without having to worry that it will automatically kick in. TweetDeck reps say they've heard us and are working on a solution. I'm not sure if Deck.ly paid Tweetdeck for this integration, but I'm sure there's some deal and maybe that's causing the delay.

Yes, these clients are free, but that doesn't mean users don't have a voice. If you don't want forced Deck.ly integration in your TweetDeck application, you have two options:


In the meantime, if you use TweetDeck, beware. You may be annoying your followers with lots of Deck.ly links and be talking way more than you intended.

Now, get back to tweeting and be safe out there.
Posted by Amber Avines at 12:38 PM