Kloutgate: The Battle Between Mean Girls and Influencers 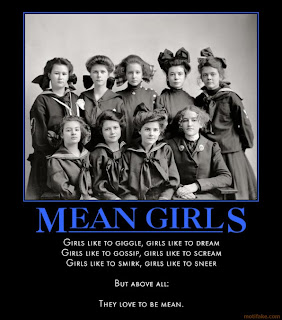 How much do people listen to what you have to say? Do they act on your suggestions? Are folks looking to you for answers? Do your online connections talk about you and engage you regularly? These are some of the factors that determine someone's Klout. If you're not sabotaged, that is; but more on that shortly.

For those who don't already know, Klout is a site that measures your online influence. Are you retweeted? Do your friends "like" your Facebook wall posts? Are you mentioned in conversations? Klout looks at these factors, and more, and then assigns you a score that rates your influence.

Although the algorithm is still being tweaked, many people (and companies!) are putting a lot of stock into Klout scores. Their hope is that, if you have a high score and an engaged audience, that people will listen to you if you say good things about their products. Simple enough. But, here's where it gets nasty.

Some folks, whether it be out of competition or petty jealousy, are trying to impede other people's progress on the site. Intentionally taking actions to stall or diminish other people's scores. Can this really be done? You betcha! If you change the way you normally act, you can have a potential impact on someone's score. Remember, Klout judges how people interact with you. In all reality, your followers and friends hold the key to your success. They can make you or break you.

Here are the top Mean Girl offenses that seem to be gaining traction in cyberspace:


But, it's not just the act of not doing those things. The "Mean Girls" used to do these things before Klout came along, but have consciously stopped. Now, it's about the competition. Why bolster someone else and help their score? If you don't, you can get ahead, right? I'm gonna insert a diabolical Mean Girl laugh HERE. (If you don't understand the "Mean Girl" reference, check out the Wikipedia entry.)

Is this sabotage solely geared to neutralize the competition? Perhaps, so the Mean Girls can get perks and offers their friends don't? What about so they can get bragging rights to the best score in their clique? Whatever the reason, the Mean Girl ranks are growing.

Sure, lots of people are still cautious about the accuracy of Klout. And, frankly, since it doesn't incorporate blogs into its algorithm yet, I think that's a major handicap. However, businesses such as Fox, Audi, Virgin America, Starbucks, TNT, Disney, and Nike are using the site in their publicity efforts. Identifying online influencers, giving them samples or promotional items, and then hoping for some good buzz. It's a solid strategy as traditional media gives way to the new world of social media.

So, my friends, beware the Mean Girls. They may not be 15-year-old girls, in fact they probably aren't. In all likelihood, they're 40 year old men or 28 year old professional women, but they're Mean Girls at heart. People who feel good when you feel bad. Folks whose main goal is to outshine you and humble you in the process.

And, as for Klout, it may be in its infancy, but it's laying the groundwork for the future. A time where John Q. Public has just as much influence as Anderson Cooper and Larry King. And maybe more.
Posted by Amber Avines at 8:48 AM