The business of bums, breasts, and butt cleavage

Some things make me scratch my head. Others make me fear for the future of the human race. Maybe I'm old-fashioned, but these things get a big thumbs down from me. How about you? 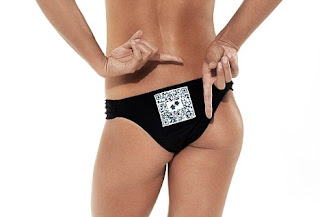 As part of a new advertising campaign, the British women's beach volleyball team will now be sporting QR codes on their bums. Yep, as if men didn't stare at women's butts enough, now they're being encouraged to zoom in and take a photo! The codes will appear on women's derrieres starting today.

Spanish toy company Berjuan has introduced a new doll that breastfeeds. Little girls just need to strap on the halter with petal-covered nipples and they're ready to nestle their doll's face into their non-existent breasts.

Yes, I know some women will say that this toy will help breastfeeding in public become more acceptable or help kids better understand their bodies, but I say let little girls be little girls! Part of the joy of childhood is being blissfully unaware of the adult responsibilities of life (I'm also anti toy vaccuum, but that's another story).

This month I went to an event for journalists, sponsored by Facebook. Lots of professionals on the panel and in the audience. I was in the front row and, much to my dismay, was exposed to massive amounts of butt crack. Yep, you read right. Butt crack.

A guy was there taking photos for his company (a photo collective in Los Angeles) and every time he kneeled down to take a shot, he mooned the audience. Consider this free advice: if you're going to take photos at an event, wear pants and underwear that cover your rump (I can't believe things have gotten so casual in business that I even need to say something so ridiculous!).


So what say you? Is this all just too much? Are you fed up with droopy drawers, sexually-charged advertising, and inappropriate kids' toys? Or, do I need a chill pill?