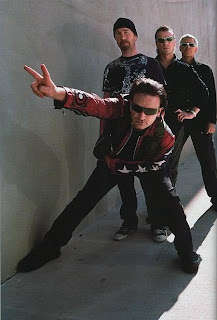 A few days ago I wrote about the live webcast of U2's Rose Bowl concert in California. Did you watch it last night? I did. And, for almost three hours the world felt a little smaller—a little closer.

I watched the Twitter scroll on YouTube and saw comments from fans around the globe. People tweeting in different languages, from faraway lands. I also went to Twitter directly, where 33 percent of the trending topics were U2 related. People who were up in the middle of the night on the other side of Earth, watching and tweeting during this spectacular, free concert. Folks who shared something in common; the universal language of music.

Generally big name entertainers see the opportunity to make loads of easy cash by allowing fans to "attend" these mega-events via outrageously-priced, cable pay-per-view shows. But, U2 has never been your run of the mill rock band. Bono continues to push the envelope in such new and exciting ways that it no longer even resembles an envelope.

U2 is a band that practices what it preaches. It's all about inclusion, change, enlightenment, philanthropy, and heart. The webcast was yet another example of that. U2 embodies everything that rock stars should be. Everything that any rock band could be, if they cared a little more about the music and the mission—and less about the moola.

Thanks for a great evening, guys.