Death to the Butt Dialer 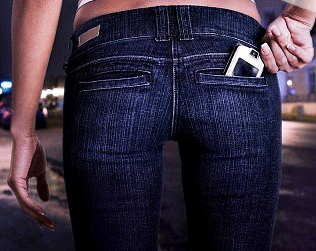 Every Saturday morning while I'm still nestled in bed, the Butt Dialer calls. Yesterday, in an effort to curb a killer headache, I laid down to take a nap. The Butt Dialer knew. He called me five times in 60 minutes. The Butt Dialer always knows when I'm sleeping and I want him or her to take a long walk off a short pier.

You know who I'm talking about. The person who puts their cell phone in their back pocket and accidentally dials someone from their phone book. It's unintentional, but as they shift or sit, their butt cheek hits dial and send. The Butt Dialer never just calls me once, they call four or five times in an hour. On Saturdays, they call when I'm in my peak REM sleep. There isn't anyone on the line per se, but I can hear them walk. I recognize the sound of pant legs rubbing together and I occasionally hear garbled noises in the background.

The number they're calling me at is a landline and I don't have caller ID. I've tried to *69 them, but I receive a recording that that option won't work on that number. I've tried to block them, but my phone company won't let me block a cell number. The Butt Dialer is harassing me relentlessly and they don't even know it.

Yesterday, I thought I had my first clue. The faint sound of a baby crying. I only know one person with an infant, so I quickly sent a tweet to ask if he could check his phone to see if he might have accidentally called me five times. He responded and said no. Back to square one.

Now, I don't think the call is emanating from a purse; I can hear too much ambient noise. I'm almost positive the phone resides in a back pocket and has an intimate relationship with this person's butt check. I don't know if I'm the unlucky recipient of these calls because my first and last names begin with an "A" and I come up first in their phone book, but I suspect that might be the case.

If you have my number and you read this post, I implore you to check your phone to see if you're calling me. It's usually bright and early on Saturday mornings, but this week I got bonus Wednesday aggravation. I've come to cringe when my phone rings, knowing that this is just the first of a thread of calls from the dreaded Butt Dialer.

As a point of responsible electronics ownership, I hope this post serves as a reminder to use the lock feature on your cell phone. It's there for just this reason. It will preserve your minutes and prevent you from accidentally harassing your friends and making them miserable.

Have your own Butt Dialer horror story or solution? I'm all ears.
Posted by Amber Avines at 4:05 PM