Ben and Jerry's has decided to do something that many companies are too afraid to do. It is dumping its email marketing efforts. 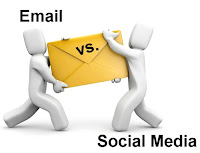 This month, the popular ice cream maker distributed its very last e-newsletter and has decided to engage with customers exclusively through social media. Many are touting the decision as smart; whereas others say the move is premature.

I don't know about you, but the last time I read an e-newsletter all the way through was probably 2005. Although the medium was effective at one time, I simply don't have the time for it anymore. Besides, I just see those kinds of emails as clutter. More "stuff" clogging up my inbox to sort through and delete. And, frankly, email is the last place I go to these days. The majority of my personal and professional dealings take place on Twitter, Facebook, and LinkedIn.

One of the things I love most about social media platforms is that the content is short and digestible. And, it lives somewhere else (e.g. a Facebook page, a Twitter feed, etc.) which means no "housekeeping" for me.

Now I know that last part is what companies traditionally don't like. They want you to have to see it. But the new world order dictates that people will willingly consume advertising for products and services that interest them. That means catching up with a friend on Facebook and then visiting a company's Facebook page is no big deal. People are happy and willing to do that. What they're not willing to do, however, is to read a series of long articles touting how great your business is. That's so 20th century.

Besides, if you look at the stats, social media is the future of advertising. On Twitter, for example, 42% of users use the platform to learn about products and services. If your company is not represented (and engaging with current and potential customers!), you're missing out.

So, what do you think? Is Ben and Jerry's just the first of many big companies to make the big move and dump email marketing? Or it is a shortsighted effort that the company will come to regret?
Posted by Amber Avines at 2:15 PM