Why are you following me? You're freaking me out! 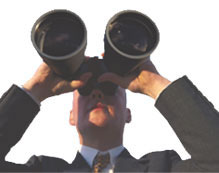 If you've read my blog before, you probably know I hate the word followers. And, although I don't like it, I accept that this is the accepted term on Twitter.

In LinkedIn's continuing effort to turn its site into a platform with more social networking options, it introduced the "follow" button a few months ago. I saw it, didn't like the idea, and forgot about it. Until today, that is.

I was participating in some discussions on a few LinkedIn groups and I happened to see my "follower" count was 361. Now, I know my contacts are rolled into my follower count (which I think it foolish, by the way), but I only have 349. My follower number is 11 higher than that.

I clicked around and saw that a dozen people I don't know were "following" me. That means they are able to keep track of my contributions to groups, my comments, my activity, and my overall interaction on LinkedIn. To some people that might not matter, but to me it does.

My LinkedIn network is comprised of people I have worked with or other professional contacts I have developed. I'm not an open networker (i.e. a LION) and I don't connect with random strangers. My contacts are people I've interacted with in some shape or form who I wanted to add to my online rolodex. They are individuals who I can generally count on when it comes to business; people I respect and trust. Sure, I connect with unknown people on Twitter and Facebook, but LinkedIn is my exclusive professional hub.

So, as I see it, 11 people are sitting in the shadows spying on me. These people have not introduced themselves to me, they haven't shot me an email, they haven't made any overture. They're lurkers. Watching what I do. Now, I realize some of you might think it's a compliment if someone thinks you're interesting enough to follow. And for casual socializing and networking, on Twitter for example, I might agree. But, not on LinkedIn. Not in my professional, online office. (By the way, you can block people on Facebook and Twitter, but there doesn't appear to be a block option on LinkedIn.)

I don't need, nor want, followers on LinkedIn. If someone is interested in my professional contributions or knowledge, reach out to me! I am always open to a "how do ya do?" and eager to make new contacts. Heck, I love it! But, watching what I do in a professional context and not having the courtesy to extend a virtual handshake freaks me out!

Wanna connect on Twitter? Let's do it! Want to engage on Facebook? You betcha! Want to strike up a mutually beneficial professional relationship? I'm in! But don't be the weirdo with the high-power binoculars who watches people from afar without their knowledge. It's unsettling and I don't want any part of it.
Posted by Amber Avines at 7:16 AM