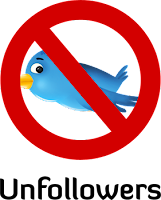 The one thing I really enjoy about social media is the elevated sense of etiquette. People share, support, thank, and make meaningful connections on the site. Generally, folks have a wonderful sense of reciprocity. Follow them, they'll follow you back. Share a link of theirs, they'll share one back or say thanks. Good manners abound on Twitter (at least in my stream). That's why I'm saddened to see the latest trend gaining momentum: unfollowing.

It started with Chris Brogan, then Darren Rowse followed suit. Both said it was in an effort to help clean up their Twitter streams and DMs. Now, plenty of ordinary people are saying, "If the big guys are doing it, I'm going to do it, too!". I'm seeing mass purges everywhere. I'm disappointed that some of social media's most influential names would legitimize this sleazy practice. Perhaps their reasons made sense to them, but they've set a trend that is contrary to the philosophy of social media and the idea of community building.

Here's the reality. Most people who have a large number of followers built their numbers on reciprocity. They connected with someone and that person followed them back, or vice versa. Those numbers were built on a mutual connection (let's face it, only "real" celebrities can get tens of thousands of followers from scratch and only follow back a handful of people). Now, much to my dismay, it's the hip thing to say your Twitter follows are unmanageable, your DMs are being hijacked, and you can't focus on anything in your stream. You simply must unfollow everyone so you can start over with a clean slate. Know what I say to that? Hogwash.

It's no secret that I despise those who work the numbers to artificially inflate their followings. I have 5,000 followers, yet could have far more if I followed back every bot and spammer. But, I don't (I firmly believe in quality over quantity). Instead, I look at each and every Twitter profile and decide whether or not to follow back. If the person doesn't break one of my 12 Twitter rules, I'll give a followback. As such, I don't get any spam. Ever.

Today I saw a post by Daniel Newman that talks about the purging practice and the rationale behind it, going as far as to say "Don't pee on me and tell me it's raining." He does a great job of outlining the ways that anyone could combat the problems that people are citing as reasons to unfollow. Danny Brown also has a post on the subject. He shares a "leaked" email that implies the mass unfollows were to get attention. Although quite amusing, this was never my theory. However, I'm glad Danny called out the the unfollowing practice, too.

I still think Chris and Darren are smart people. If you read my blog regularly, you know I've raved about how much I love Chris. Darren is a darn great guy, too. However, it's kind of like when you learn that Santa Claus is really your mom and dad. Don't preach about community and then tell me unfollowing your community isn't anything personal. It may not be personal to you, and lots of people may kiss your backside saying you're a trailblazer, but I'm not drinking the Kool-Aid.

Big names in the social media space serve as role models; teaching by example. When they do something, they set a trend. Granted, everyone can do as they please and there are no official rules to any of this social media stuff. I get that. However, now those who work the system with mass follows and unfollows are no longer sleaze bags and charlatans. They can now conduct those shady practices knowing full well that they have the perfect defense: "If the social media gurus can unfollow everyone, why can't I?"
Posted by Amber Avines at 7:33 AM