We see it all the time. Bait and switch techniques abound. A lie here, a half-truth there. Get people now no matter how you have to do it. The only problem is, what happens when they realize they've been misled? 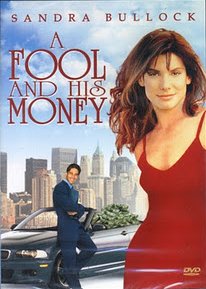 Last night I rented a horrible move, A Fool and his Money. As you can see from the photo on the right it's a Sandra Bullock film. Yeah, right. That's just what the greedy SOBs who pimp the film want you to think. Sadly, after wasting two hours on the flick, I Googled it and realized it was originally released in 1988, but re-released in 1995 after Bullock achieved fame in Speed. Some wiseguy decided to capitalize on her popularity and showcase her prominently on the DVD cover, despite the fact that Bullock appears in the film for no more than four minutes combined. A Sandra Bullock film? Not a chance.

I'm sure you've seen misleading practices before. We all have, sadly. But do they win the race in the long run? Sooner or later, people always find out that you've misled them. Is the short term gain worth the long term alienation? I'd say no, but lots of folks say yes.

That yes usually comes from greed. More money, more customers, more subscribers, more readers, more impressions, more sales, more traffic, more, more, more. But, after the truth comes out, after everyone finds out they've been misled, the damage is irreparable. Is a white lie still a lie? Is a half truth still 50% fact? Why gamble with your reputation when that's really what defines you in the end?

The next time you push anything out into the public, do a reality check. Is this an honest and fair assessment of what people can expect? Does your webinar address the content that you said it would? Is your brochure copy true? Does your store actually carry the products advertised in your sales circular? Will your product deliver on the promises you've made?

Misleading folks only leads to short term gains. Aren't we all in this for the long haul?
Posted by Amber Avines at 7:21 AM