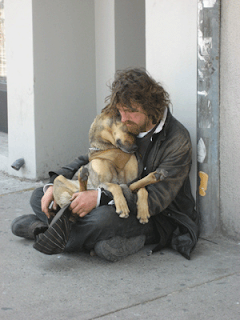 This year I went to my first Black Friday sale. Like many others, I showed up in the wee hours of the night to wait in line. I had expected my subsequent blog post would be about the camaraderie I felt with these strangers as we all waited in line for cheap stuff. However, my experience was much more profound.

My friend and I showed up a bit past midnight and the store opened at 5am. Only five measly hours outside in Southern California, no worries. I knew it was a bit chilly, so I wore a t-shirt, a long-sleeved tee, and a sweatshirt. On the bottom I had sweatpants and knee-highs. That should be enough, I thought, it is California and Californians rarely don a heavy jacket.

About a half-hour into our wait, my friend could no longer hold her book steady because her hands were shaking so violently from the cold. I pulled up my hood and slipped on a second sweatshirt, promptly pulling that hood up over my head, too. A half hour later, I put on my gloves, pulled a second pair of socks out of the gym bag in my car, and put on my heavier tennies. I had a pain in my feet so severe I could barely stand it. I don't think my tootsies have ever been so cold. And, despite the four layers of clothes I had on top, I felt like I was only wearing a tank top.

I began to think about the poor folks who have no choice but to sleep outside every night. Sure, one would think it's easier to be homeless in Los Angeles than Chicago, but even the West Coast is no picnic if you're forced to find warmth where none exists. In my mere five hours outside, all my layers of clothes were useless in taking the chill from my bones. What I needed was a heavy coat and some really good insulated boots. Then came my "A-ha!" moment.

This holiday season, I will no longer just be donating money to my favorite charities. I will be going through my closet to pull out all the coats and boots that sit there year after year, waiting for a ski vacation. I will be asking my friends and family to do the same. In addition to taking the majority of the items to my local homeless shelter, I will also throw some in the trunk of my car to give to anyone I happen to see in need. Since I also have a soft spot for animals, I'm going to donate some doggie sweaters and jackets as well, since so many homeless people have canine companions.

Today, as the holiday season is in full swing, I'm most grateful for the roof over my head and the walls that keep the cold at bay. And, after my five hours outside in the chilly, winter night, the new 32" TV I snagged doesn't seem nearly as important.
Posted by Amber Avines at 5:35 AM