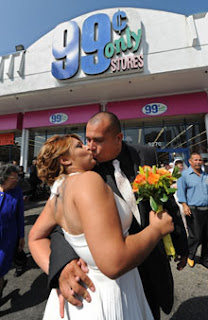 This week (on 9/9/09 to be exact), nine couples received a discount wedding, priced at the unbelievably low price of 99 cents. The weddings, underwritten by the 99¢ Only Stores, were part of a promotion to wed nine couples and provide them with their wedding day essentials (e.g. flowers, dinner, photos, and a hotel for their honeymoon night). Nearly 3,000 couples entered the contest and the nine winning couples were married on Aisle 9 between 8:09 a.m. and 9:09 a.m. at the chain's Hollywood location.

Now you couldn't pay me enough money to get married at the 99¢ Only Store (not even $99 million would do it), but I have to hand it to the marketing folks over there. They do a great job of getting media exposure. This story was covered across the country and millions of people saw the products that are available at the 99¢ Only Stores, from decorations to food items.

As for the people who participated in the contest, I'm at a loss for words. If my fiance ever suggested such an idea, I'm afraid that would be grounds for an immediate break-up.
Posted by Amber Avines at 4:57 PM