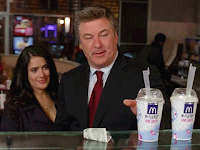 As the new TV season approaches, I can't help but to wonder how many products will be "integrated" into my programs this fall. It used to be that product placement was fairly subtle. A box of Cheerios in the background as a mom prepared breakfast on a sitcom. A guy sitting on the couch holding a bag of Doritos before a killer snuck in the window during a crime drama. But, last season the product placement went up about eight notches on a scale of one to ten.

Off the top of my head, I can remember a few priceless moments where products should have received "guest star" credit.

1) On Desperate Housewives, Bree leads us on a four-minute tour of her new Lexus. She gushes about the features ad nauseum, even leaning in to demonstrate them for her neighbors. The scene ends, of course, with a tight shot of the Lexus logo.

2) On 90210, Annie and Dixon go on a road trip and have to bring Dr. Pepper because it's "not a road trip" without it. Many lingering close-ups on the can, the can in the cooler, the can in their hands, the can with a shirt on that says "I went to Arizona and all I got was this lousy t-shirt" (okay, I jest about that last part).

3) On Smallville, Chloe goes out of her way to mention WebMD.com in a conversation. In the same episode, Jimmy utters a forced reference to CareerBuilder.com. Yes, they added the ".com" to their conversations. C'mon, writers don't really write like that unless, of course, they are told to do so.

4) On 30 Rock, there was an actual plot line where Jack and Elisa are obsessed with the McFlurry that's served at McDonald's. They show them smacking on their ice cream treats several times during the show, with the grand finale landing them at a McDonalds. (Tina Fey denies this was outright product placement, but NBC did manage to land a McDonald's commercial for that particular McShow. Just a coincidence, I'm sure.)

As for production placement in the new TV season, who knows what's in store for us. I can't help but to fear that The Office will have a story line where it's bought out by a major office supply retailer and renamed "The Office" Depot. Hey, it could happen.
Posted by Unknown at 9:00 AM