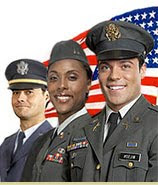 Chevy has started a new promotion to honor our country's military heroes (the nomination form says servicemen, but I'm sure that's just bad copyediting). People are encouraged to nominate a friend or family member who is in the armed forces and exemplifies the military spirit. Entries can only be 200 words in length, or you may submit a video.

Nominations will be accepted until September 28, with the five finalists named on October 5. At that point, the public will be invited to vote for their favorite. The ultimate winner (and his/her family) will be sent to the Country Music Awards to enjoy the show and meet some superstar singers. He/she will also receive a 2010 Chevy Equinox. And, a randomly selected winner will get a free trip to next year's NASCAR race.

Do you know someone who has inspired others, overcome insurmountable obstacles, or demonstrated amazing character? Nominate them and share their story.

Our military has made such sacrifices on behalf of our country that a night out on the town and a car seem like paltry acknowledgment. However, I applaud Chevy for doing something to acknowledge these fine people. Wouldn't it be great if every American company did?
Posted by Amber Avines at 6:06 AM